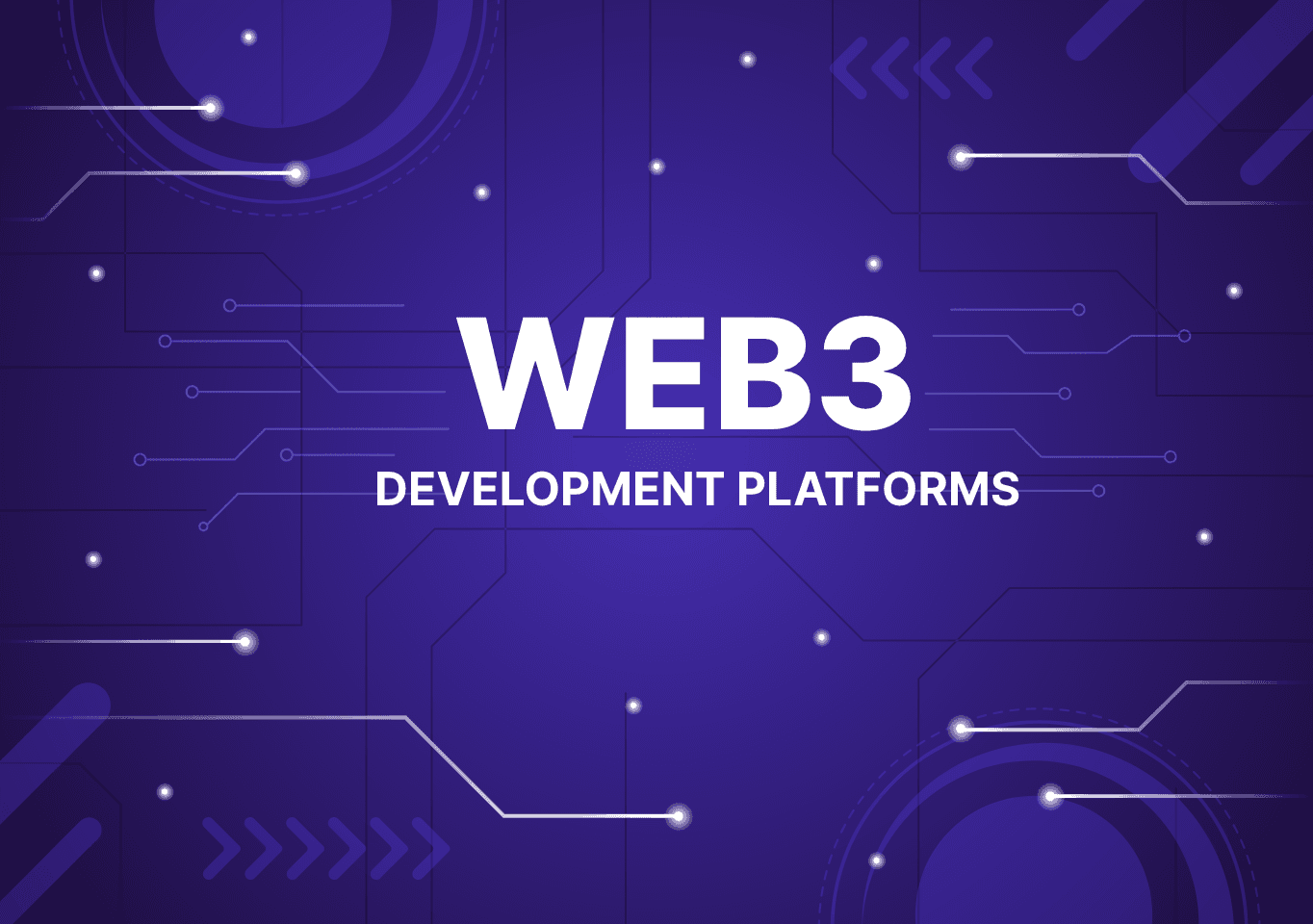 Web3 Developers Are On The Rise

This article will cover many of the promising Web3 development platforms, helping you as a developer onboard blockchain development or simply making your life as a creator easier.

The transition from web development or simply software engineering to Web3 can be somewhat stressful. It requires learning a new programming language (for example, Rust or Solidity), using the Blockchain as a backend, connecting a wallet, etc.

First of all, you need to figure out where to start. Which Blockchain should I use? How do I choose between Ethereum, Polygon, Solana, Cosmos, or the other blockchains?

Then you need to learn a bunch of new terms.

Smart Contracts and the Blockchain Stack

A key component of Web3 is smart contracts, the distributed, immutable code deployed to the Blockchain. Any DeFi project, NFT marketplace, or other Dapp relies on smart contracts. While they started on the Ethereum blockchain, smart contracts are now found on all blockchains and are essential to becoming a Web3 developer.

In many cases, a web3 developer only needs to create a front-end app that calls a smart contract. You can use many ready-made, open-source libraries.

Most Web3 developers start with Ethereum or an EVM-compatible blockchain. As a result, Solidity, Ethereum smart contract language, has become one of the most popular programming languages.

Even though Solidity resembles Javascript, it has a steep learning curve. Understanding the importance of the code you write, the impact on cost, and handling code immutability. Rust is on the rise, too, famous on Solana, Terra, and the Cosmos ecosystem.

How To Start With Web3 Development?

A growing number of platforms for blockchain coding are available today. These platforms range from Web3 starter guides to libraries and SDK for easier coding and scaling.

Buildspace is an excellent place for Web3 beginners or developers who want to learn new skills. The platform offers tons of easy-to-learn weekend projects and a thriving community of builders who can support you.

I love the slick user interface, the clear explanations, and the large community. Buildspace founder Farza originally started the website as a platform for home-schooling, later pivoting to Web3 development full on.

Their business model is similar to StackOverflow, where they match developers and companies looking to hire developers. You can find a large job board of Web3 positions and a list of developers of many kinds.

Another emerging platform is Thirdweb, which lets you easily interface DApps, create NFTs, and have a simple, no-code, user-friendly interface.

Since deploying a smart contract is often a repetitive process, Thirdweb helps in reducing the hustle and errors in this process. Thirdweb allows less experienced blockchain developers to create NFTs and tokens, set up an NFT marketplace, create a governance token, or deploy a revenue-splitting contract.

I prefer to have complete control over the smart contracts I deploy, but it's a great way to start a new crypto project for those who aren't as tech-savvy.

Moralis is one of the best Web3 infrastructure providers, allowing developers to easily interact with many Web3 services such as authentication, NFTs, on-chain data, and smart contracts. The platform aims to become the Firebase of Web3, letting everyone access all Web3 services.

When you create a new NFT mint page where users can connect their Metamask wallet, you need your UI to query details about this wallet. Moralis helps you do precisely that. The company's platform saves developers time and money to ship scalable and robust Dapps.

The company offers an API interface to Ethereum, tutorials for creating new projects, and a great SDK to support high-performance Dapps. They also let you launch your blockchain nodes and scale them on demand.

I love their concept and implementation. There’s a great need for companies like Moralis, which can help scale and bring Web3 to everyone. Using such companies, it’s easier to build quickly, even at home, than anything you want.

Alchemy is a true beast, one of the largest unicorns in the blockchain infrastructure and Web3 space. With a tremendous valuation of 10 Billion dollars in 2022, Alchemy provides Web3 builders and companies a simple backend to the Ethereum blockchain development. Starting in 2017, Alchemy has been at the forefront of Web3 infrastructure.

They provide a simple backend API for a Web3 Developer to query nodes on Ethereum, Polygon, etc. Using Alchemy, companies grow and rely on a solid foundation. For example, every time you create a Dapp and let a user connect a wallet, you need to query a blockchain. Logging into Alchemy, you can spawn a node on the Ethereum blockchain and pay per usage. The price is relatively low compared to the value you'd get. The free tier and many times enough.

Infura provides web3 infrastructure, similar to Alchemy. They offer top-quality Ethereum APIs and IPFS APIs, the backbone of Ethereum Dapps. Infura is widely known for its contribution to the Web3 ecosystem. Furthermore, Infura launched the ITX, an easy way to send Ethereum transactions. You can set your gas budget, and they will help you manage transactions and ship them at the best times.

The Future of Passive Income is Here​

In addition to the platforms above, many new Web3 platforms are emerging. These Web3 tools and blockchains are trying to address different problems and attract talent to increase their ecosystem.

Here are some web3 development platforms you should watch in 2022:

Ceramic is a foundation for an interoperable web, and it plays a crucial role in bringing back open data and decentralized identity. With Ceramic, you can store data that requires cross-platform interoperability and multi-party consumption without relying on a third-party service. The network operates by decentralizing application databases, providing universally understandable data. Additionally, since the information is managed directly by cross-chain identities, users can discover and share content across applications.

Ceramic's permission-less data streaming network allows DApp developers to share files with anyone globally and save streams of information directly to the decentralized web. Ceramic's data network infrastructure is also scalable and can maintain its state independently, allowing parallelization of stream transactions.

Aside from providing structured data models, Ceramic also offers a set of standards that conform to new data models and improve developer experiences. Among the top Blockchain, integrations are Ethereum, Avalanche, Gnosis, SourceCred, Consensys, and more.

Launched in 2019, PARSIQ was developed to enable the widespread adoption of blockchain technologies and harness the technology's potential for business and crypto applications. With this network, real-time notifications are sent to users to provide relevant on-chain updates and inform their decisions.

PARSIQ has begun focusing on its new vision to become a Web3 backend and foundational technologies provider. They aim to provide clients and developers with unparalleled user experiences by connecting their Web3 dApp and protocols. PARSIQ has been continuously working on several solutions to achieve these goals, including Tsunami API, Data Lakes, Data Hub, SDK, Development Grants, Atlas, and PARSIQ Hybrid set to launch this year and in early 2023.

PARSIQ positions itself as the full backend for all Web3 development by adding these features. Along with lowering the complexity and costs associated with Web3 applications, PARSIQ strives to provide a seamless integration experience and top-notch user experience for all consumers. At the time of writing, PARSIQ is supported by top applications building the future of finance, including Binance, Polkadot, Solana, Chainlink, Injective, and more.

Through its hooking services, deBridge aims to become the worldwide standard for all cross-chain swaps, smart contract composability, and bridging of NFTs. Web Developers can scale up their protocol and pass random information from one Blockchain to another through deBridge, a decentralized standard for liquidity transfer and cross-chain interoperability.

The platform uses a new generation of cross-chain applications that allow swaps and transfers from a single user interface, eliminating the need to build multiple bridges. With deBridge, web developers and clients no longer need to worry about slashing since the entire system is decentralized and insured by design. In addition, due to its easy-to-access cross-chain liquidity for all blockchain ecosystems, liquidity fragmentation won't be a problem, unlike other networks.

As deBridge unlocks cross-chain interoperability, the team continues to explore opportunities for system upgrades over the coming years. DeBridge has made tremendous progress since its founding last year with the help of ParaFi Capital and investors.

Pioneering the most significant and influential Web3 development in Africa, Jambo aims to impact millions of lives through Web3 adoption. In addition, Jambo serves as a bridge between blockchain applications worldwide and users in Africa. These solutions make it possible for the African market to become closer to the Web3 ecosystems and financial prosperity.

Africa ranks 6th in the top 20 Global Crypto Adoption Index due to its massive income-generation potential. With this success, Jambo has successfully positioned itself for the next ripe ground of Web3. TechCrunch recently reported that Jambo raised $7.5 million from Coinbase to fund its Web3 Super App development chain in Africa.

With its omnichain interoperability protocol, LayerZero offers seamlessly connected blockchains and low-level communication primitives. LayerZero primarily aims to go beyond the limitations of existing omnichain activities. LayerZero consists of two parties, namely the Oracle and the Relayer. Messages can be transferred from chain A to chain B using a single and simple interface.

Currently, LayerZero is available across EVM-compatible chains like Avalanche, Ethereum, Fantom, BNB Chain, Optimism, and Arbitrum, with plans to include chains like Cosmos and Solana down the road. LayerZero raised $135 million last month to fund its ventures and accelerate the progress of its interoperability blockchain protocol. The company has taken an enormous step forward in enabling software developers to build a Dapp by opening the interoperability landscape.

Omnichain NFTs are one of the excellent implementations of LayerZero's technology stack. The NFTs on this platform are spread across multiple blockchains, where a user can move assets from one chain to another. Using this platform to create distributed NFTs could make a real game-changer.

What Is Your Web3 Development Platform?

All web3 development platforms have cons and pros, and I believe in trial and error. In the world of Web3, you have to start by choosing your Blockchain and programming language. Sometimes, it's even a more complex question altogether.

Start from the beginning, go through the tutorials, let yourself feel the platform, and connect with its community. Always think about security when dealing with the Blockchain. The crypto space is full of uneventful moments, and remember that giving access to your wallet, provides access to your funds.

The path to becoming a Web3 developer is still a bit confusing, but I'm sure that it will become more evident as time goes by. The future of distributed networks will grow as time goes by, and I'm sure we'll still see many exciting innovations in the future!

Web3 Developers: The Future is Coming

I'm sure that we'll soon see more mature and well-built projects that will propel the Web3 vision forward!

The Best of AI Magic

Stay ahead with the latest in Generative AI.