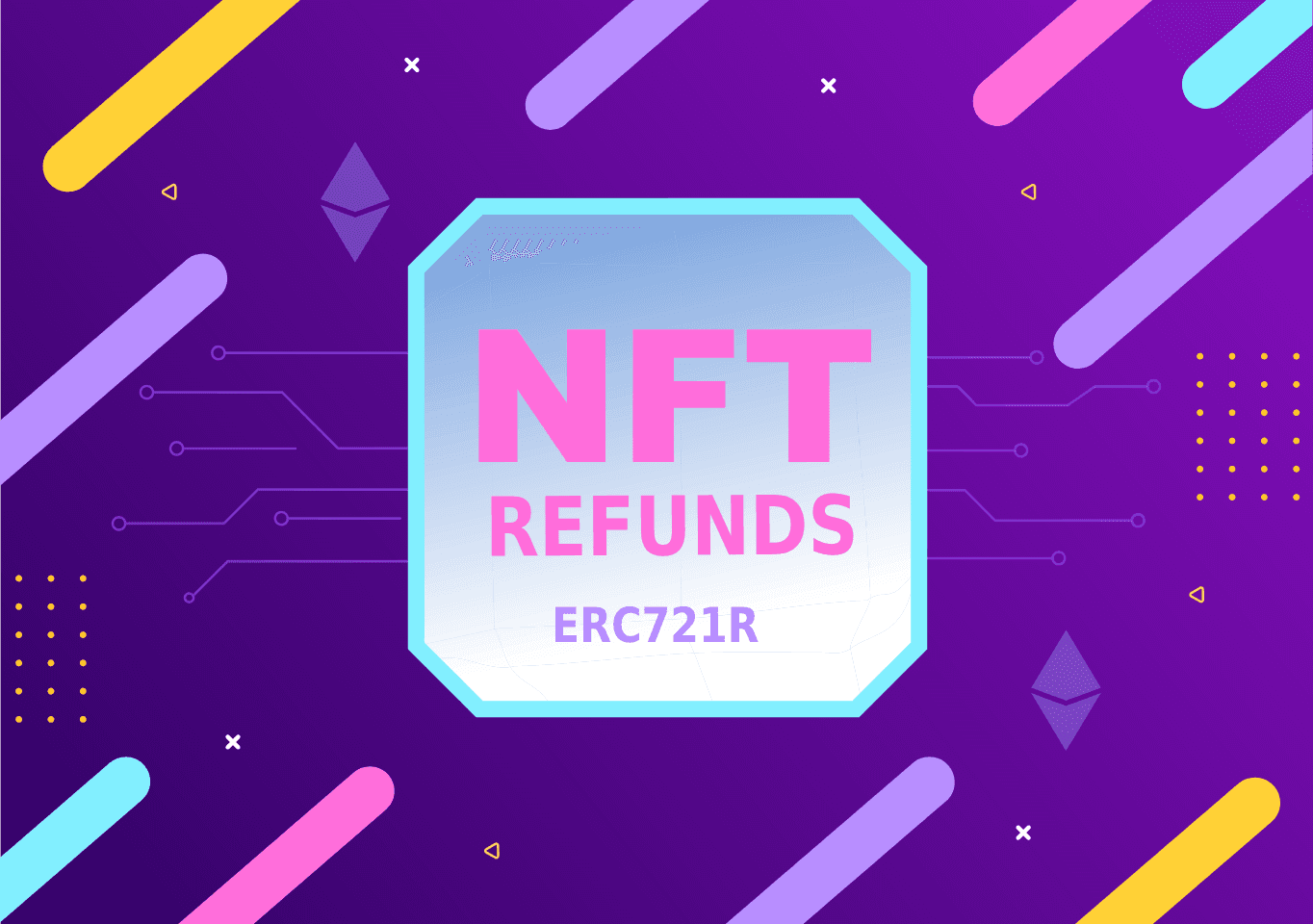 Using this standard, users who mint an NFT could get their money back within a predefined time frame. The best part is not requiring anyone's approval, making any users eligible for a refund in a trustless fashion.

Let's see why and how this works.

The Need For NFT Refunds

Almost every online course or digital product on the internet offers a 30-day money-back guarantee. So why don't NFTs? Is there a way for new, unknown projects to gain the trust of their users while remaining decentralized and hidden?

Thanks to ERC721R, this could change now.

With a fancy name such as ERC721R, this new token standard builds on the existing ERC721 standard. Most NFTs we know today use the ERC721 smart contracts, ranging from the Bored Apes and Crypto Punks to small, niche projects.

The official launch took place on April 10th, 2022, in a viral tweet through Cryptofighters, getting more than 1300 retweets and almost 3000 likes.

Every contract that implements these methods will allow users who mint NFTs to get a refund, all by themselves, during a defined period by the project owners. Since the refund period is usually set up when the contract is initially deployed, users need not worry that the refund functionality will suddenly be disabled. Individual projects may make changes to the code, however.

What Are NFT Refunds?

Smart contracts that implement the ERC721R standard are said to support NFT refunds. What does this mean?

Let's say a user wants to mint a new NFT for 0.1 ETH. So the user sends a mint transaction to the project's NFT smart contract, with a 0.1ETH in the transaction.

This money will be "locked" in the smart contract until the refund period passes. For example, if the contract provides a 30-day refund guarantee,  the funds will be locked in the contract for 30 days, and the owner will not be able to withdraw them.

What Are the Advantages of NFT Refunds?

Rugpulls are cases where project leaders promise future development and roadmap, only to disappear right after a mint is complete. These are unfortunately common in the NFT space.

A refund period will encourage accountability, at least as long as users can get their funds back. This means that while refund is enabled, project leaders know that the previous funds are not theirs yet. They will have to deliver, at least within and after the mint period. This increases the chances for community due diligence in case wrong signals arise.

Imagine a case where a user believed a particular project would be of value, only later discover that things are going south, not as expected. Instead of selling the NFT below the initial mint price to protect his investment, the same user could request a refund. Even better, as the payback is trustless and defined in the smart contract, users could do it all by themselves.

If the user wants to get a refund, return the NFT and get the money back, he must submit a refund transaction. The contract checks that the request is within the allowed time period, and the NFT changes ownership, sending the money back to the user.

The only costs users have to pay are the transactions gas costs. The original mint funds are locked in the contract, ensuring that there will be enough funds to pay the user back.

Web2 refunds are a reality. "It works well for businesses that use it," Steinbock said. "Because most people do not ask for a refund." To implement this functionally, a Dapp needs to add a refund button on their website, and that's it.

Gas will still be charged to users and refunded by the mint. Thus, they won't have a free ride to the mint, check if they got anything valuable, and return the NFT if they don't like it.

According to Steinbock, the ERC721R standard is more than a rug pull; it is a way for NFT communities to establish trust. For example, minters can verify that a project's creators can't just sell and run, and creators can show that they won't do so.

The release of ERC721R amends new and better opportunities for both project creators and marketplaces. The great thing about ERC721R is that nonfungible token creators can choose the number of days for the refund period. For example, a project could decide on 14 days, 30 days, and even a 45-day refund period.

Once the NFTs go into the market and away into the blockchain space, the mint functionality will not be available anymore.

In the future, it's not hard to imagine NFT projects advertising their refundability with an ERC721R icon.

​​According to its Github page, The team plans to add new, cool features in the future:

At Geshet.io, we'll soon add individual membership NFTs for our community. These membership tokens will be refundable with omnichain NFT support.

Implementing permissionless refunds at the smart contract level can boost new users' confidence. For example, users that purchase a membership and want to return it will submit a transaction and get their full payment back.

Another project to implement refundable NFT memberships is Exodia, a leading NFT analytics platform that implemented a 14-day refund period.

Exodia originally sold lifetime platform access at 0.15ETH, with a native, permissionless refund, which 5% of minters took advantage of, according to founders Elie Steinbock and Amir Hagafni. Elie and Amir are also the minds behind the new ERC721R standard.

Cryptofighers is the project that initially introduced the ERC721R standard. The project plans to support refunds for purchases of up to 45 days natively in its upcoming mint.

This means that users who mint NFTs on the primary sell will be able to receive their funds back. It's exciting to see how this unravels, as this is the first large-scale community NFT project to mint to use this concept.

The refund functionality is not supported on the many NFT marketplaces, such as Opensea and Rarible. Once an NFT has been traded on the secondary market, it's no longer refundable. Wallets that purchased the NFT in the original mint are available directly. Therefore, the refund period is relevant only for newly-minted projects on the primary market.

We might see a nearby day where the NFT marketplace adds a native NFT refund support, allowing users to engage with the marketplace to get funds back directly.

ERC721R may have problems, especially when expert NFT traders choose to abuse the refund mechanism. For example, NFT traders could mint more than they intended, wait for a reveal to see a collection's best traits, and refund and return the rest. However, this could create an abuse mechanism, which can be mitigated by creating additional limitations on the contracts, such as several maximal refunds allowed and maximal minted items per wallet.

Less risky projects with higher floor prices are better for such a concept. Essentially, it's a mini example of what a decentralized blockchain does - it lets parties trust each other when they otherwise couldn't. Ultimately, Bitcoin's incentives are designed so that miners keep the chain secure because it's in their best interest to do so. Likewise, people can store millions of dollars of personal wealth on the network because they trust it.

The Future of Refundable NFTs

As the NFT space matures and more players enter every day, it's only natural that safety mechanisms are showing up. Preventing rug pulls and sharing data will be the future.

Enabling trustless refunds via ERC721R can be a game-changer for Web3 applications, one that we could witness in the following NFT projects to be released in 2022 and onwards. Valuable NFTs and new projects make an effort to gain trust, and providing a trustless way to receive a refund is a beautiful way to show that.

On the flip side, I'm sure there's a long way to go until all edge cases, and risk factors are solved. Crypto hackers and scammers are smart and can twist things we never imagine. Nevertheless, I see this as the natural progression of this field, and I'm excited to see what's coming next!